We can't find the internet

Due to the hard work of the Phoenix LiveView team, there has been a lot of work done. However, there have been some breaking changes.

For example did the LiveView component that I mounted in the router as live "/products", ProductListLive stop working properly. The layout wasn’t properly added. So, if you update from a version prior to 0.8.0 I will show you how to fix this.

I have also seen a lot of questions on this topic so I will write up my findings.

As of this writing, the it seems that the Phoenix 1.5 will come with new layouts.

However, since Phoenix 1.4.16, the root layout can also be used when mounting the LiveView component in the router.

First I need to make sure I am on latest version of Phoenix. It needs to be 1.4.16 or above.

And update the dependencies.

Then create a new file called app.html.leex with the content:

And now that I start the server, everything seems to work again 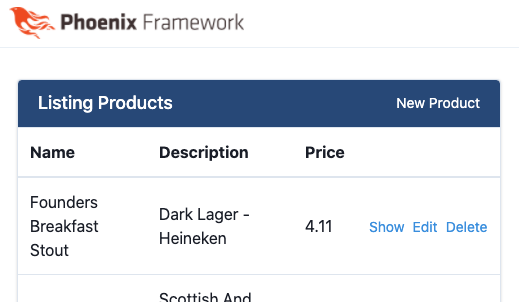 Generate a Phoenix Boilerplate and save hours on your next project.

How to combine Phoenix LiveView with Alpine.js

No matter how great Phoenix LiveView is, there is still some use case for sprinking some JS in your app to improve UX. For example, tabs, dropdowns,..

Getting Started with Phoenix and LiveView

This guide to getting started with Phoenix covers getting up and running with Elixir and Phoenix. This is a direct conversion of the Getting started..